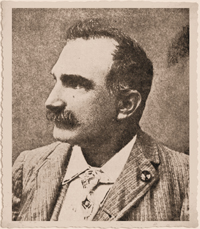 One of the most controversial astronomers in the history of this science is surely Spiridion Gopčević, whose father Spiridion was a wealthy ship owner in Trieste (Italy). Family drew their origin from the village Podi, near Herceg Novi in Boka Kotorska (Montenegro). Spiridon Gopčević was born in Trieste (Italy) on July 9th 1855 his parents’ house, situated in the central part of Trieste called Grand Canal (Canal Grande). Gopčević is not a person that can be easily described. During his life he was quite active in many areas such as politics, journalism, music, literature, history as well as the astronomy and it would be probably best to say that he was a man of manifold spectra of knowledge and an adventurer. In the early days of Spiridon’s life, his father committed suicide because of an economical breakdown, and by concern of his mother he began studying in Vienna. After his mother’s death, he left University and started a very successful career as a journalist. Soon he became famous in all of Europe by reporting from the war zones of the time. Politically speaking, he continued his family tradition by speaking in favor of the unity of all South-Slavic nations under the Kingdom of Serbia. With time he had abandoned this political idea and started to stand for the Austrian Monarchy. In 1893 his career as a journalist ended because he was imprisoned for his writing against the government.

Gopčević with his wife who was from a rich Austrian noble family succeeds in getting funds from the Austrian Government and leaves Wien. He comes to Mali Lošinj on September 18th 1893. and starts building his Observatory “Manora”. At that time Gopčević takes his “astronomy name” Leo Brenner and starts his career as an astronomer. 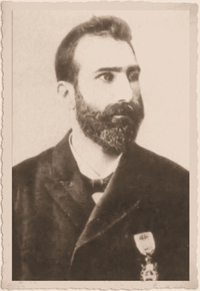 Whit time, and trying to keep his reputation, he began to boost his observations with unsubstantiated data and his reputation started to melt down. After all of these unfortunate events and the loss of his good reputation as an astronomer, in 1909 he had left astronomy and the town of Mali Lošinj and went to America.

In America Gopčević began composing music, however without any major success. In 1912 he had put on stage two musicals (The Paris September days and The lifesaver) in San Francisco. After a few years spent in America, Gopcević returned to Europe, just before the WW1 and worked as the editor of an army journal in Berlin where he wrote pamphlets spreading the idea of the reunion of all South-Slavic nationalities under the Austro-Hungarian Monarchy. The last trace Gopčević had left us with is his article about the lost lands of Atlantis and Lemuria published in 1922. With the passing of years his name kept falling into deeper anonymity and supposedly he died in Berlin, which was never proved.

Today the name of SpiridIon Gopčević (Leo Brenner) in the history of astronomy is mostly known as the name of a crater on the Moon called Brenner. The name Brenner was given to those crater by Gopčević’s old friend and German astronomer Phillip Fauth (1867-1941). 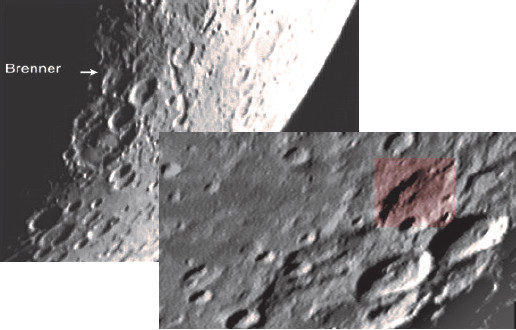 The crater Brenner on the Moon